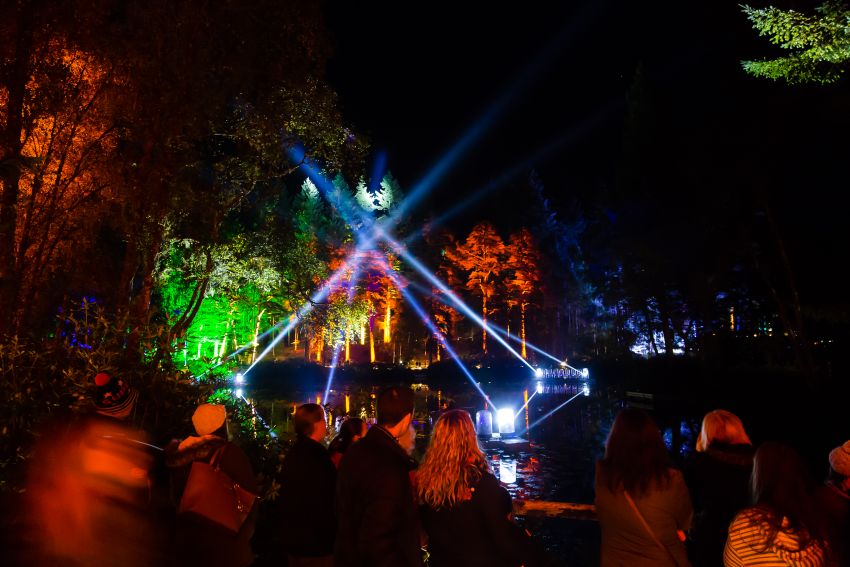 The Enchanted Forest, Perthshire’s multi-award winning sound and light show, presented each of the three 2016 charities with £5,000, following their successful charity evening opening night from this year’s show shimmer.

Three charities: Scotland’s Charity Air Ambulance, Kidney Kids Scotland and British Heart Foundation were all selected to benefit from this year’s show through ticket sales for the event’s opening night, which took place on Thursday 29th September. They each received a cheque for £5,000, bringing the total charitable donation from the 2016 show £15,000.

“Not only does The Enchanted Forest light up Faskally Wood every October, boosting tourist trade in the quieter months, but it also lights up the lives of the Scottish community through our charity donations. Were delighted to open the show each year with a special charity night, directing proceeds towards three highly important organisations in Scotland. As we grow, so does our ability to help different charities, which is extremely heartening.”

“Kidney Kids Scotland were absolutely thrilled to be chosen as one of The Enchanted Forest charities for 2016 and are extremely grateful for their generous donation. The money raised will help children and their families from across the country suffering from renal and urological illness both directly and through our support for the paediatric renal services in Scottish hospitals.”

“This is a fantastic donation from The Enchanted Forest and one which will go towards helping save lives in Scotland. Sadly, heart disease touches many families and it was wonderful to know that the families who came to enjoy the charity night were helping raise money for our life saving research.”

“SCAA is extremely grateful for this support and for a donation that could mean the difference between life and death for someone in desperate need of an air ambulance when speed and urgent medical attention are critical factors in their chance of survival.”

The Enchanted Forest, which was recently crowned Best Cultural Event at the UK Event Awards, was once more headed up by the multi-award-winning creative team of Derek Allan as producer and creative director, Kate Bonney and Simon Hayes as lighting designers, and RJ McConnell and Jon Beales providing sound design and composition. Additional creative expertise was provided by leading creative companies including NL Productions, Squid Soup, 59 Productions and Vision Mechanics.

The 2016 show, shimmer, marked The Enchanted Forest’s 15th year and has been widely hailed by visitors as the best event to date with many visitors taking to social media channels to express their delight at the spectacle. Just over 70,000 visitors attended this year’s show, a 13% increase on the previous record-breaking year.

It is estimated that the event’s impact on the local tourism economy is expected to exceed £3 million per annum with around 50% of all visitors to the event choosing to stay overnight in the area on their visit and over 90% citing the event as their main reason for visiting the area this Autumn.