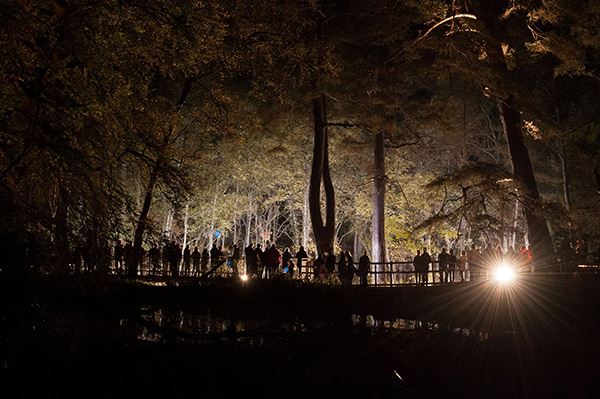 The Enchanted Forest Community Trust, organisers of the award-winning sound and light show in the woods, has awarded a whopping £10,000 to a range of worthy projects in Highland Perthshire.
This is the fourth year that such a fund has been available, and the good causes range from a Girl Guide trip to Switzerland, to a Christmas Market in Pitlochry, and the purchase of new Neighbourhood Watch signs. Full list as follows:

The 2016 show, shimmer, marked The Enchanted Forest’s 15th year and has been widely hailed by visitors as the best event to date with many visitors taking to social media channels to express their delight at the spectacle. Just over 70,000 visitors attended last year’s show, a 13% increase on the previous record-breaking year.

It is estimated that the event’s impact on the local tourism economy is in excess of £3 million per annum with around 50% of all visitors to the event choosing to stay overnight in the area on their visit and over 90% citing the event as their main reason for visiting the area in Autumn.

Scotland’s premier sound and light show is a three-time winner of Best Cultural Event at the Scottish Event Awards and was recently crowned winner of the Rural Tourism & Hospitality Award at the 2016 Scottish Rural Awards.

“2016’s shimmer extravaganza saw more people visiting The Enchanted Forest than ever before. This incredible support means we are able to fund a host of exciting local community projects. We’re delighted that our show helps make all of these projects possible, and visitors should feel proud that, just by visiting the show, they have done their bit to give back to the community and benefit the local area.”

This year’s Enchanted Forest will run from September 28 to October 29 and tickets will go on sale to the public in June 2017.

The Enchanted Forest announces 70,000 tickets to go on sale
Scroll to top