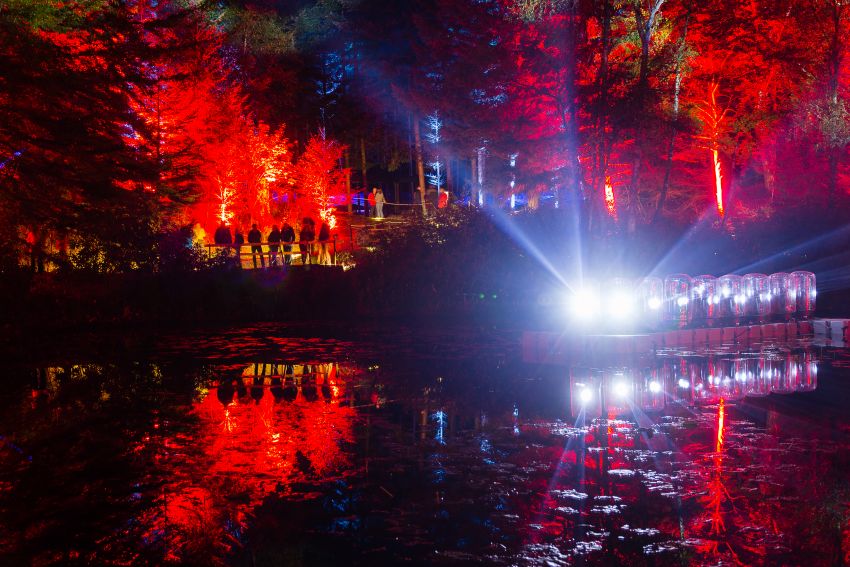 Scotland’s premier sound and light show, The Enchanted Forest, secured its place as one of the U.K.’s top tourism events after winning Best Cultural Event at the U.K. Event Awards.

The Pitlochry based show, which recently celebrated its 15th anniversary with a record 70,000 visitors, beat off stiff competition at The Drum awards, including the Magical Lantern Festival London and Diwali Festival of Lights, at Thursday night’s ceremony in London.

The win, for The Enchanted Forest’s 2015 show FLUX, is the latest in a long line of awards for the Perthshire event, which recently swept the board at the Scottish Event Awards, picking up no less than three titles.

The Enchanted Forest has grown from a 3-night run and 1500 visitors when it launched to becoming an event that attracts visitors and media attention from across the globe. Each October the show turns Pitlochry’s Faskally Wood into an other-worldly experience, funds local community grants and boosts the local economy to the tune of more than £2 million. Last year’s FLUX show funded 27 community grants for local initiatives, as well as donating money to three chosen charities.

The Enchanted Forest has built up a strong, ever-growing audience by changing theme each year and bringing together the cream of the crop of the U.K. arts scene. FLUX combined the creative talents of producer and creative director Derek Allan, lighting designers Kate Bonney and Simon Hayes, and composers and sound designers RJ McConnell and Jon Beales

This year’s show, shimmer, sold out six days after opening and more than 90% of visitors recently cited The Enchanted Forest as their main reason for visiting the Pitlochry area.

“We’re absolutely thrilled by this accolade. Being named the U.K.’s Best Cultural Event underscores all the hard work that goes into not only putting on The Enchanted Forest, but keeping it fresh each year. People travel from all over the world for the show and it generates lots of positive press for Highland Perthshire. We’re proud to be driving tourists into the woods’ of Pitlochry at what has always been a traditionally quiet time of year.

“A huge thanks must go to the hard-working and talented team behind the show, from technicians, stewards and volunteers to the producers and creatives, and also our marketing agency Volpa.”