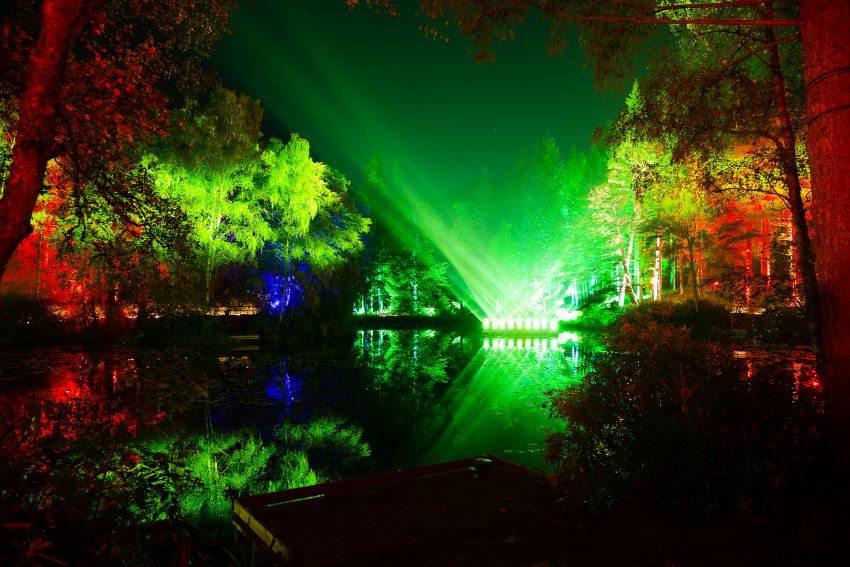 The 15th annual Enchanted Forest launched tonight in a shimmer of light, original music and some of the country’s top creative talent.

A select audience of press and VIPs gathered in Faskally Wood, Pitlochry for the opening of what is now a must-see on the UK’s tourist calendar and a cultural and financial boost to the local Perthshire community.

Angela Constance, Cabinet Secretary for Communities, Social Security and Equalities, switched on the lights for this years show, called SHIMMER. For The Enchanted Forest’s most ambitious display to date, organisers have not only lit up Faskally Wood but raised the creative bar with a show that provides fantastic light displays, original music and extra surround sound. Making a shimmering entrance this year will be a giant interactive puppet, a walk-through ‘wall’ of light and a stunning light show on the loch.

This year’s event, which runs from 29th September to Friday 30th October, is once more headed up by the multi-award-winning creative team of Derek Allan as producer and creative director, Kate Bonney and Simon Hayes as lighting designers, and RJ McConnell and Jon Beales providing sound design and composition.

More than 65,000 tickets went on sale this year and organisers The Enchanted Forest Community Trust are reporting sold-out shows already, with an additional 3000 tickets going on sale to the public earlier this week to meet demand. Extended to a month-long run last year due to its popularity, The Enchanted Forest brings in an estimated £2 million to the local economy every year. A special charity night takes place on Thursday 29th September, with a percentage of proceeds going to Kidney Kids Scotland, Scotland’s Charity Air Ambulance and British Heart Foundation Scotland.

“We’re thrilled to be celebrating the fifteenth anniversary show of The Enchanted Forest and we’re particularly proud of all the work that’s gone into the SHIMMER show. The Enchanted Forest not only illuminates our Perthshire countryside every Autumn, it also lights up the local community. Monies raised by the show help a host of community projects and a dedicated charity evening raising money directly for well-deserved causes. And of course it’s a celebration of some of the cream of the crop in the U.K. arts world.”

“I’m delighted to be opening The Enchanted Forest in its 15th year and to see this award-winning show go from strength to strength. This is an event that is a great equaliser, bringing people of all ages and backgrounds from across Scotland and beyond, into the forests of Highland Perthshire.

“It’s incredible to think that it started as a three-night event with 1500 people and now attracts more than 60,000 visitors. In that time The Enchanted Forest has, remarkably, reinvented itself each year with a new theme. Yet it remains true to its original aims: of bringing people outside; celebrating the outdoors and the arts; and giving back to the community through the funding of valuable local projects.”

The Enchanted Forest shortlisted for Thistle Award
Scroll to top