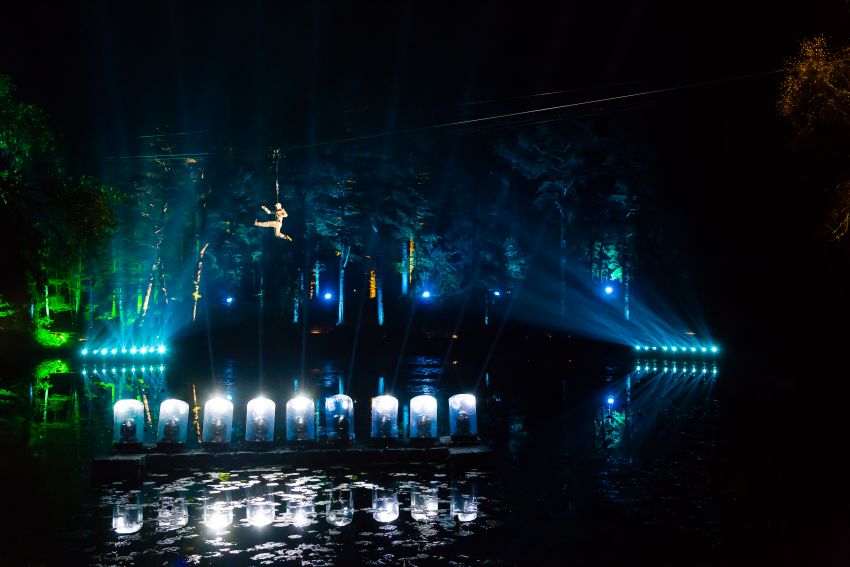 The Enchanted Forest, a brilliant sound and light show that transforms a Perthshire wood each October, is 15 years old this year.

To celebrate, here are 15 facts about the show, now a multi-award-winning event that sells tens of thousands of tickets. This year’s Enchanted Forest, called Shimmer, starts on September 28th and runs every night in October at Faskally Wood near Pitlochry.

1. The Enchanted Forest had humble, and small, beginnings with just 1500 people coming to the first show over 3 nights. Last year, a record 62,000 tickets were sold. Sales this year are already set to surpass this.

2. It takes around 100 people every year, from designers to stewards and from ground staff to technicians, to put on this stunning event.

3. The Enchanted Forest is a huge boost to the economy of Perthshire and to tourism in Scotland. It brings in an estimated £2m to the local economy every year. That’s a great thing for the community.

4. It’s an event that gives something back. Each year The Enchanted Forest has a dedicated charity evening. This year’s charity night is September 29th with proceeds going to: Scottish Charity Air Ambulance; Kidney Kids Scotland; and British Heart Foundation Scotland.

6. The Enchanted Forest made its way into a novel! The magical setting was featured in Chained to Mineola by A. Louise Robertson after the author visited the show. The book is about two people’s love for nature. One of the book’s protagonists is a technician at the event.

7. Last year the show lured the crew of BBC’s Countryfile “into the woods”. Together with presenter Ellie Harrison, the Countryfile crew put together a piece about the transformation of Faskally Wood into The Enchanted Forest, and the changing of the forest as Autumn descended.

8. There have been some famous visitors to Enchanted Forest. Last year they included Radio 1 DJ Rob Da Bank, who tweeted about his attendance to his 81,000 followers. Another was Tomas Jansen, head of sales for Walt Disney Parks & Resorts. “Well done and well executed,” said Tomas afterwards. Nice praise indeed from a Disney exec!

9. The Enchanted Forest’s awards are so many you’d think they grew on trees. Except they don’t – they’re the result of very hard work! This year’s accolades include the coveted Scottish Rural Award for Tourism & Hospitality 2016; Best event 2015 at the Scottish Thistle Awards; and three shortlistings, two for the Scottish Event Awards and one for the Chartered Institute of Public Relations awards for best marketing strategy.

10. There’s a larger-than-life character coming to visit this year, courtesy of Vision Mechanics. At their workshop in Leith, the puppet company has been constructing something extra special, extra huge – and interactive. All will be revealed when the show opens.

11. Digital animators 59 Productions, another contributor to the show, did their first ever event in Pitlochry as part of the Pitlochry Festival Theatre. They’ve since worked on everything from the Sydney Opera House to the London 2012 Olympics opening ceremony.

12. Digital artists Squidsoup have an interactive treat in store: a walk-through light installation that has been exhibited all over the world, from Australia to Mexico City. Other work by Squidsoup has included ‘animated’ Shakespeare quotes and digital moving insects. Fascinated? You should be.

13. The Enchanted Forest reinvents itself every year. And that’s what makes it a magical experience. The creative brains come together and produce a unique experience every time. So there’s no “I’ve seen it before” – you haven’t!

14. There will be drone footage this year for the first time, so expect some amazing, shimmering, visuals.

15. The show has its very own set of music composers and lighting designers . Sound design and composition is done by the hugely talented RJ McConnell and Jon Beales. And there’s a dedicated sound engineer who’ll be mixing the music in 7.1 surround sound. The fantastic lighting design is done by Kate Bonney and Simon Hayes who have worked to create new and exciting effects each year.