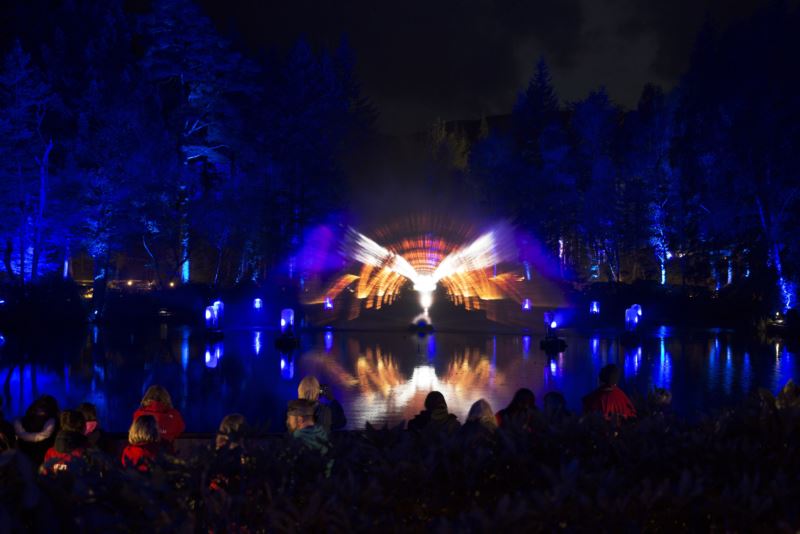 Ticket sales for this year’s Enchanted Forest have smashed through the 50,000 mark this week, making “Oir an Uisge” the fastest selling show in the event’s 16-year history. Event organisers, The Enchanted Forest Community Trust, released a record 72,000 tickets and fully expect that, for the first year, the event will sell out completely before the opening night.

“This year’s ‘Oir an Uisge’ show is set to be stunning and will show Faskally Wood and its loch in a whole new light, quite literally. We cant emphasise strongly enough that people should buy tickets in advance to ensure they secure a chance to visit.”

This month has also seen the launch of the Voice of The Enchanted Forest competition, calling for children aged between 5 and 12 to record a script to be used during the month-long event at Pitlochry’s Faskally Wood this October.

Telephone auditions are currently open to find the winning Voice, which will appear in a recording to be played to tens of thousands of visitors as they travel by bus from Pitlochry to the forest for the event. The Voice will welcome visitors to the forest and remind them of some important health and safety messages.

The competition is being run in conjunction with Bauer Radio and its Radio Tay, Radio Forth and Radio Clyde stations. The winner will record a pre-written script at one of the three radio stations, get VIP access to the station, and be guest of honour at the show’s special preview night on 27th September. To enter the competition, call 01738 700140 and follow the audition instructions. The competition runs until midnight on September 12th. “Oir an Uisge” opens to the public on Thursday September 28th with proceeds from that night benefiting three charities: Tayside Mountain Rescue, Alzheimer Scotland and Giraffe.

The Enchanted Forest Sessions – lifting the lid on the music making that...
Scroll to top