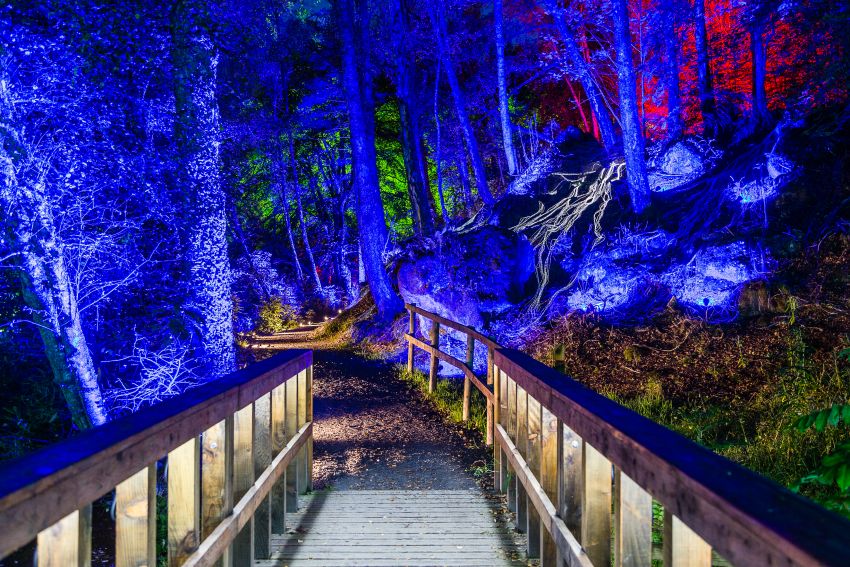 The Enchanted Forest has a double reason to celebrate this week after being named as a finalist in Scotland’s top tourism awards AND being picked as one of the UK’s top autumn events by TripAdvisor.

The Scottish Thistle Awards shortlisting for the sell-out 2017 show – Oir an Uisge – is the fifth in a row for Scotland’s premier outdoor sound and light event which takes place at Faskally Wood in Pitlochry.

News of the event’s shortlisting for Best Cultural Event in Central, Fife and Tayside comes just days before the much-anticipated 2018 show – Of The Wild – opens to the public on Thursday, October 4.

Meanwhile, The Enchanted Forest has also been picked by Trip Advisor as one of the UK’s must-see events this autumn. The show is featured in the Best UK Events for October 2018 section courtesy of HolidayLettings.co.uk – the UK’s leading holiday rentals website and a TripAdvisor company. The article is now live on the site which attracts an audience of around seven million visitors per month.

“I’m excited to announce that we’ve included The Enchanted Forest in our travel feature Best UK Events for October 2018 – as one of the top 10 UK events taking place next month. This list has been compiled to celebrate only the best of the UK events from October, and the final shortlist is selected from hundreds of the biggest and most exciting events across the UK.”

The Enchanted Forest released a record 80,000 tickets for sale this year and with only a few thousand now remaining, organisers are urging the public to book quickly to avoid disappointment. All weekends are sold out, but there is still some availability Mondays to Thursdays, especially later shows after 8.30pm.

“The show has grown from the strength to strength and last year’s was record-breaking, with just over 73,000 visitors in attendance. We’re delighted there is so much interest again this year, making it by far the most popular show to date. However, we would advise those who haven’t yet booked to do so as soon as possible as the full show is likely to sell out before it begins next Thursday, October 4.”

The 2018 event, entitled Of The Wild, is firmly rooted in nature and inspired by the hidden mystery of Faskally Wood after dark. The dazzling spectacle is produced by Zoe Squair and designed by lighting designers Kate Bonney and Simon Hayes. The original music score is by RJ McConnell and Jon Beales.

This year’s show is supporting three charities – the Outdoor Access Trust for Scotland, The Birks Cinema Trust and Blairgowrie Riding for Disabled.