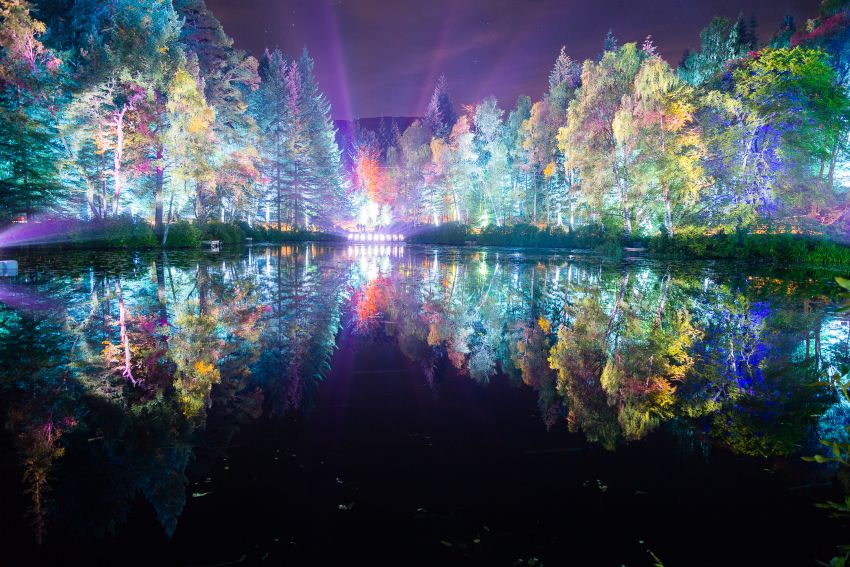 The Enchanted Forest, Scotlands premier sound and light show, has been shortlisted for three prestigious awards.
The show, which takes place every October at Faskally Wood, Pitlochry, has been shortlisted in the Large Event of the Year and Peoples Choice Award categories of The Drum Scottish Event Awards. The Peoples Choice Award is a new category added this year in which judges choose the shortlist and the public votes for the winner.
The shows marketing and communications agency, Volpa, was also shortlisted for Marketing Strategy of the Year for last years show, FLUX.
FLUX attracted record visitor numbers, with 62,000 people attending an event that, once more, pushed creative boundaries. The 65,000 tickets on sale for this Octobers show are already breaking sales records.
The Enchanted Forest, now in its 15th year, extended its season last year due to popular demand. Run by Enchanted Forest Community Trust, it brings in an estimated £2 million to the local economy and was recently awarded the coveted Scottish Rural Award for Tourism & Hospitality 2016, beating off stiff competition from more than 50 of Scotlands top tourism businesses.
Ian Sim, acting chairman of The Enchanted Forest, said:
Its heartwarming to think that this event, which began with just 1500 people over a few nights, has not only grown so much but continues to be innovative and inspiring. Were delighted to be recognised by the Scottish Event Awards. This is testimony to the amount of work and talent thats behind The Enchanted Forest. Its a massive and committed group effort, from designers and engineers to stewards and box office staff and, of course, our marketing agency, Volpa, who have also been recognised with their own shortlisting.
The winners will be announced at an awards ceremony on October 5th in Glasgow.