The Green Park hotel in Pitlochry is a long established and very popular family run hotel, in Highland Perthshire.

The hotel is to be found on the western outskirts of Pitlochry, a small town of two to three thousand, which lies within the southern edge of Highland Scotland.

The hotel is spacious and full of light. The public rooms are well appointed and restful. The bedrooms are neat and attractive; all have private bathrooms, colour televisions, tea/coffee making facilities, hair dryer, electric blankets and direct dial telephones. 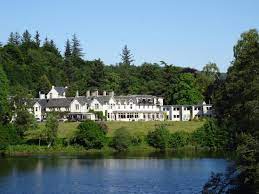